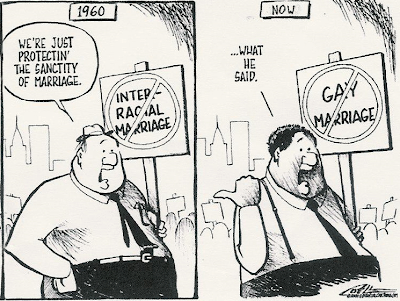 In the political cartoon above you are give juxtaposition between Jim Crow inter-racial marriage laws designed specifically to keep African Americans in an inferior role and the established mores of marriage today which recognize this institution to be between one man and one woman. Clearly the cartoonist is attempting to connect those who oppose gay marriage due to their support of conventional marriage today with those who supported the segregation of the races in the 1960's and before. I disagree with the fundamentals of this comparison on the basis of why these two laws were created. The former was based on oppression and the latter is based on culture.

"Culture" is a society's process by which it adapts. It encompasses shared history, values, beliefs, and norms. What the cartoonist is attempting to do, and what the Gay/Lesbian community is trying to do, is shame people into agreement by superimposing their struggles with the struggles of African Americans. I have no problem at all with gays attempting to advance their agenda. What I find troubling is when any group attempts to use OUR history as a tool to achieve their personal objectives. The history of African Americans is “copyright protected” and not for public use, thank you very much! There is no question that gays have suffered injustices but to attempt to compare the life of a gay person today to the life my ancestors faced in the 1960's is just wrong. So much has been stolen from my people, now even our history. In short, I wish you the best in your effort but get your own cross to bear.

You may be missing the point Reginald. Gays have suffered just like African Americans. You both were discriminated against. This is what the cartoon is trying to say.

TELL THE TRUTH AND SHAME THE DEVIL1

You 8;49 said "You may be missing the point Reginald."

No he didn't. All he is saying is you can't compair your life to our life. What black went though is unique to us. You don't see the Memphis fire department turning water hoes on gays. Or the MPD turning dogs on gays.

Everybody suffers but don't use us.
You were right Reginald.

9:39 What my comment meant was that we need to be more tolerant. Now that I've taken a second look maybe they should base their argument on their own lives and less on African Americans.

Watch and see if they don't start saying you hate gay people. They can do no wrong.

I feel that gays are discriminated against, to a lesser (and just plain different) degree. Gays are socially shamed and put down, but never put into a subservient role. Cast aside, but not subservient.

The cartoon is a poorly thought-out comparison of apples to oranges actually. Gay people can conceal the factor upon which they meet with discrimination, sexual preference. Black folks cannot hide our skin color -- the basis upon which we face/faced discrimination. It is downright insulting when some form of discrimination is termed, 'the new black.' No discriminatory struggle in history can be compared to that faced by blacks in the U.S. I would appreciate people discontinuing the belittlement of racism against blacks in the States. What a preposterous comparison....

What I took from the comic was the fact that people have prejudices, whether it be about skin color or homosexuality. How these two groups are/were treated are different, obviously. But I think that the comic is trying to make us see the fact that even if some of us may think that we are right in what we think, from the point of view of the two people trying to get married, it is wrong. If two people are happy, who is more wrong? The happy couple, or the people trying to stop that happiness?

Thank you for your point of view. One clear thing I try to state in my blog is that I don't have all the answers. I appreciate the views of others.

You make a fair point. My concern as an African America is when ANY group use us as an example of their situation it impacts how people see the struggles that my people have gone though and are still going through.

Please continue posting at my site I enjoy your input.

Even so, gay people are in every race. it can be compared in that both in certain areas of the law were/are treated as second class citizens every minority has a right to live as the majority so to say that black struggles were worse than gay or gay is worse than black, it is wrong, especailly if you are not either or both because you do not know. the same hostilites that faced black are and have been facing gays just as long. always will people kill and opress things they arent or do not understand thats how the world works, gay rights is a civil issue it is a human issue because they deserv the same everybody is getting. everythings ties into itself we are all responsible for history and currency

Thanks for the comment. You are right and I would be the last person to get into an argument about which group suffered more than the next.

As an African American I too have strong feeling about issues relating to my people. My view is less about gays but more about the protection of "my" history. I hope you understand and please keep posting.

The cartoon is saying that the same people who protested interracial marriage are the ones protesting gay marriage because they have nothing better to do, in a sense they are empty minded and are simply protesters because that is what everyone else is doing

You found one of my old posts! I gave a lot of thought to that one.

Community Organizer and the Executive Director of SMA, Inc.

I welcome your opinions but remember my rules: keep it clean, keep it civil, keep it truthful, and share your knowledge not your anger.

Please mail all correspondence to: